KUH lets you preview its first model at 5390’ in Berkeley 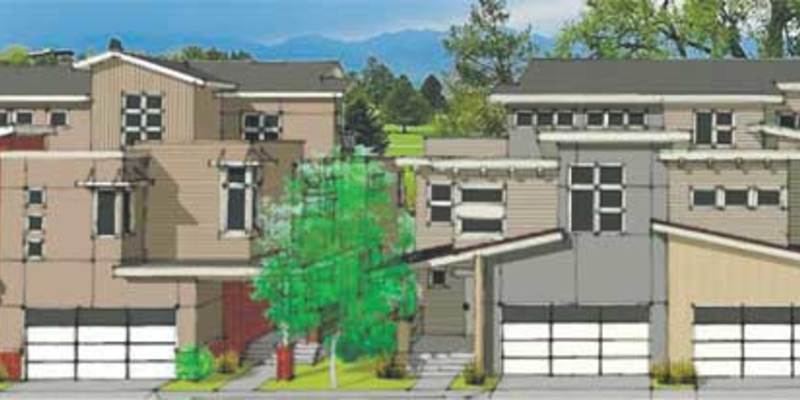 Koelbel Urban Homes seeks out those one-of-a-kind locations for its city-styled homes that big production builders could never mess with, and they’ll let you preview one of those this weekend with a tour of a luxurious new-urban model home. KUH calls its master-planned neighborhood atop Denver’s Berkeley area
“5390’” — one of city’s best promontories, 110 feet higher than Denver’s mile-high elevation of 5,280 feet — with views west to the Continental Divide, and south over Willis Case Golf Course to Pikes Peak.

That hilltop just east of Inspiration Point Park is famous for its El Jebel Shrine, the site decades ago of many a high school senior prom
(the Moorish architecture is being preserved as part of the plan). But Koelbel’s vice president Dana Keller says that most of the buyers taking contracts on KUH’s luxury single-family and attached homes aren’t old enough to remember that. Rather, they want this location for its proximity to Berkeley’s restaurant scene along Tennyson and for its easy commute to downtown.

Koelbel has four new-urban series set around 5390’s site adjacent to the golf course, from the mid-$600s to a low $1 million. Today and this weekend, you can tour a Peak-1 three-bedroom, paired-home with just short of 2,500 square feet, plus an optional finished basement with another 1,100 square feet. Around the corner, you’ll visit an Inspiration Series four-bedroom-plus-loft, single-family home that’s already sold, and another on track to deliver next month, almost 4,400 square feet including the fin-shed basement, at $1,156,188.

All of those homes you’ll tour have two-car garages and modern styling by KGA Studio Architects, and come with a site that offers less landscape to maintain but includes a private yard for a garden-plus-barbecue or for a labradoodle to wander. KUH community sales manager Natasha Densmore says those features are absolutely important to seven buyers who have already lined up for homes in the two series, folks who want to frequent Highlands dining/entertainment venues a mile south or make frequent trips to DIA.

There are two series still to come at 5390’, and both may prove more popular than the two opening now. KUH is pre-selling a Clubhouse Series of luxury walkout homes that back to the golf course, with views west over Inspiration Point, from $1 million (two of those sites have been released and sold quickly); also, a series of Peak II paired homes for two sites by the old shrine, sized from 1,772 to 2,086 square feet, from the mid-$600s. You can see plans for those and even arrange delivery in early 2018.

Koelbel Urban Homes will stage a formal opening for the Peak 1 paired home model NEXT weekend, with the smart money on seeing both collec-tions now and returning next weekend for that presentation. Koelbel’s 5390’ is on Tennyson, a third-mile beyond I-70. From W. 38th, take Tennyson north 1.3 mile to W. 50th and turn west to KUH’s information center; from I-70, exit west-bound at Lowell or eastbound at Sheridan, go a half mile to Tennyson, then turn north.

All renderings and plans are artist’s conceptions and subject to change without notice. All measurements, locations and features shown are approximate and may vary. All prices, features and materials are subject to change and availability. Equal housing opportunity. Consult a sales agent for additional information.